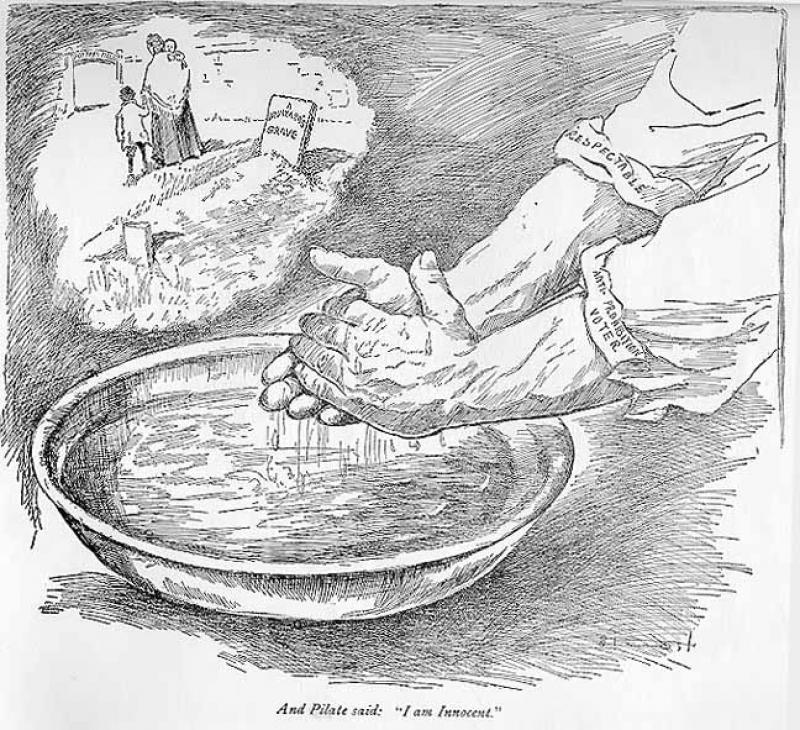 And Pilate said: "I am Innocent."

“Pilate was a past master in the art of self-excuse. He claimed that he did not want to send the Master to the cross, but as the rabble demanded it, let it be as they desired, and the blame be upon their heads. But the decision was with Pilate, and however much the crowd which demanded the crucifixion of Jesus may have been to blame for the insistence of the demand, the Roman governor could not wash his hands of the blood of the innocent by any sort of subterfuge.

In the case of the licensed liquor traffic, to the extent of his own voice in government the individual citizen is responsible for the grog-shop’s continuance, if he does not cast his ballot against it. He may point to the majority of the electorate—not unlike the Jewish rabble—and say ‘The blame be upon you; I wash my hands of the responsibility,’ but moral and political cleansing is not a matter of much speaking, but of real conduct.
The only way by which the citizen can continuously wash his hands of responsibility for the license system, and the grog-shop which the system fosters, is by voting the ticket of the Prohibition Party. Any other vote is equivalent to indorsement of license and consent to the liquor traffic. For the citizen to shout, 'I am innocent!' into the ears of a majority of the electorate, is for him to line up with Pilate as a self-deceiver.”
(from Prohibition Cartoons by D.F. Stewart and H.W. Wilbur, Defender Publishing Company, 1904)