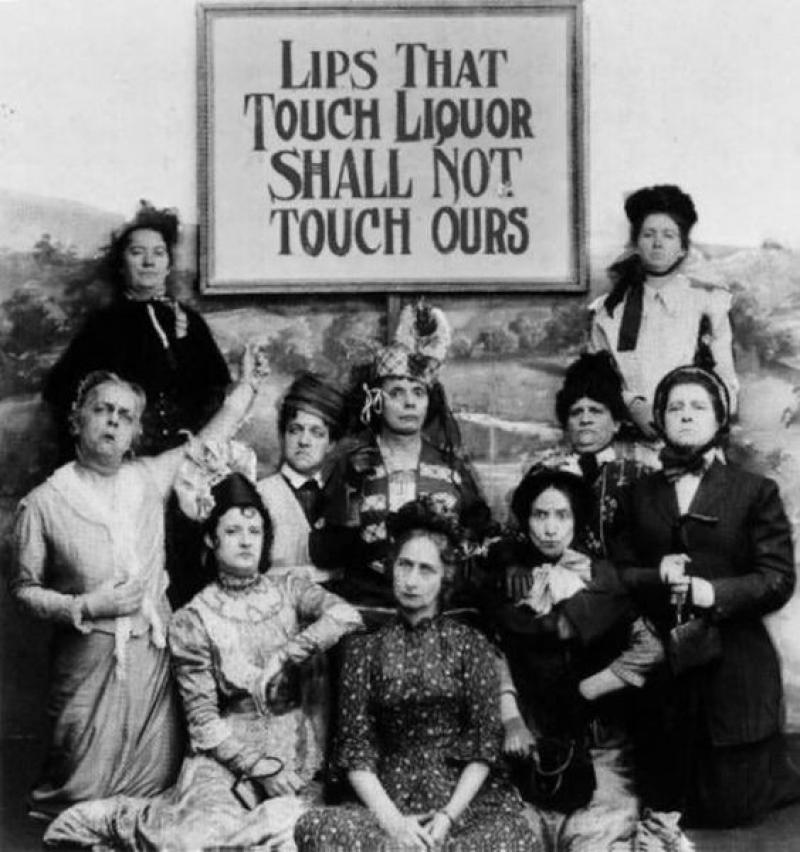 The following is scanned from Mother [Eliza Daniel] Stewart, Memories of the Crusade, a Thrilling Account of the Great Uprising of the Women of Ohio in 1873, Against the Liquor Crime (Columbus: Wm. G. Hubbard & Co.:273- )

South Charleston, a pretty and prosperous town in our county, Clark, opened the war on the saloons the same way we did. Of the work in this town, I find myself possessed of a description written, at my request, about the time I sailed for England, by Mrs. Virginia Holmes, one of the most active laders. Reading it this morning, more than a dozen years after the events so vividly portrayed, my heart thrilled and the tears sprang to my eyes as it brought back the scenes of those wonderful days.

The women of to-day have, through a baptism of suffering, developed a new phase in the history of their sex. Men for ages have been worshiping, not God, but a hideous serpent, whose mammoth proportions have enabled it to swallow relentlessly myriads of votaries, who have offered themselves living sacrifices to its insatiable demands.

The mother or wife readily recognizes in this creature Strong Drink, and in its victims, father, husband, sons. In the fear of the Lord, and praying for his guidance and protection, taking the sword of the Spirit, and the shield of faith, with the helmet of salvation, and the banner of our Savior's love over us, we marched straight into the presence of our enemy. He raised his head, shot out his forked tongue and thought to frighten us.

But we said in the name of the Lord Jesus and suffering humanity we come. And as the mouths of the lions of old were stopped, so was the power of this beast to harm restrained, and the semblance of death fell upon him for about the space of four months. But, alas, even in this seeming death he deceived the too confident, who were thereby thrown off their watch-tower. Nevertheless the nation has been aroused as never before,and though we did not succeed in entirely conquering our enemy, we did awaken the public sentiment, and the work goes on and will till we do gain the victory.

Fancy the strangeness of the work; we, who had never in all our lives entered one of the dens, where the beast made his lair, were brought face to face with him day and night, till his hated visage became familiar. We did also make the discovery that some rum-sellers at least were susceptible of better impulses than their business engendered or fostered. Though we watched their bars incessantly to prevent the traffic, they treated us with uniform courtesy with but few exceptions. One instance I think of on a bitter cold morning, when our patrols were almost perishing with cold, two ladies entered one of the most dreaded saloons. The keeper professed great solicitude for their comfort, and proceeded to close all ventilation, and with bar-room stove at whiteheat, and about a dozen stalwart tobacco-chewers spitting all over it, the situation was fearful. They came near fainting, but they did not yield their post till, fortunately, a couple of their sisters hearing of their situation, came and called them away to another point. The wife of this man assisted him in the sale of liquor, and vindicated the female character even in wickedness, for while the men were usually polite she was abusive.

But the charity that endureth all things, hopeth all things, sustained this consecrated band of women through all trials, whether of patience, faith or physical endurance.

Our Crusade lasted eight weeks, in the months of February and March, in the midst of the most inclement weather. Day after day we marched the streets, watching inside and out of saloons, never allowing a moment in which an unobserved sale could be made. We met alternately at the two churches for prayer and business meetings in the morning, and again in the afternoon, in order to form our line of march to the saloons, at each of which we formed our positions into two lines, one on each side of the pavement. Then we sang those precious hymns that will always be remembered as the rallying cry of the army that expect yet to take the citadel of this archenemy of mankind. And then such petitions would ascend as have seldom touched the great heart of the Father, because they were carried straight to the throne on the strong pinions of faith in His beloved Son, and direct answers came as a benediction to all hearts.

We were armed with the various pledges for saloonkeepers, property-holders, druggists and drinkers, and constantly presented them through committees appointed for the purpose. We sought in all our intercourse with those engaged in the business to have our hearts controlled by the charity that suffereth long and is kind, that is not easily provoked. And we relied firmly upon our Savior's promise, "My grace is sufficient for you," and we were not confounded. Our male citizens did all they could under the circumstances for our comfort and the advancement of our cause. In one instance they achieved almost a miracle. We held two mass-meetings each week in the renown Hall, which were the largest and most enthusiastic meetings ever held in our place. It was at one of these, after the work had been progressing some time, and the weather bitterly inclement, that a large-hearted gentleman proposed to raise funds for the building of a church right in the enemy's stronghold, there being a vacant lot just suited for the purpose. This occurred on Friday night. The money was raised, and all the carpenters and men gave an herculean lift to the wheel,and the next day-Saturday-at 2 o'clock, our church was regularly dedicated to the service of God, and stood there before us a monument of faith and works, with floor, roof, windows,seats and glowing stove,all complete.

How thankful we felt for this special providence in our favor. Our Church overlooked the whole rum traffic in our place. :From it the saloon-keepers could hear the voices of prayer and supplication ascending in their behalf, and in its erection they saw a determination of purpose that thoroughly awed them. It was not long till they began signing our pledge, one at a time, tin every saloon was emptied, swept and garnished-scrubbed out, I should say, and groceries put in.

Never shall I forget the night on which we received the intelligence of our first very important surrender. Our meeting was unusually crowded that night, and near the close a messenger brought us the glad tidings, when instantly all were on their feet; and accompanied by our brass band, we poured forth like the sound of many waters,

"Praise God from whom all blessings flow."

We then formed a triumphal procession, and men and women and children marched to the saloon. The band serenaded them while those most interested shook hands with and congratulated them as they stood in their door. Who will blame us for feeling unspeakably happy, for we saw the light gleaming over the hill tops.

At each surrender we had all the church and school-bells ring out their loudest peals. All our ladies who could, went into the work, for this was no partisan movement ¡ all distinction of church, politics and cast was ignored, and the sound of thanksgiving went up as that of one voice. Religiously speaking, we had a short millennium. Oh, how glorious it was!

But this sin-cursed world of ours is not well adapted to a millennial condition. The arch enemy has not yet been chained, or entirely shorn of his power to hurt, or work evil. What a consolation it is to the weary toiler that the Savior has said, "Fear not, little flock, it is your Father's good pleasure to give you the kingdom," with the blessed assurance, "Ye shall reap if ye faint not ' After our village was entirely purged, we found our work very much damaged by a small country saloon about three miles out. So we called a council of war and decided to march against it. And here again our brethren came to our aid. They hauled great quantities of wood and piled it near this house, and furnished us with conveyances. Thus aided, we boldly moved out into the woods and weather, and commenced our camping gypsy fashion. We made a log fire well heaped up, drew our conveyance near the fire, and having provided ourselves with heavy wraps,we commenced our picket guard, never omitting our religious services.

The melting snow made the ground uncomfortable. so we procured some boards, and what with our buffaloes and comforts we managed nicely. The many had by this time dwindled to the few, the true and the tried, those who had put on the whole armor. A strange sight we must have presented in our gypsy camp, minus the tents. Singing, praying and eating, for we did not forget each day to partake of our picnic dinner, jointly contributed. Our hearts were warm and glad. For were we not instruments in the Father's hands for the pulling down of the strongholds of crime and sin?

I must tell of one bitter morning when the snow had fallen so deep, and it was altogether so unpropitious that only two of us went out. We found no blazing fire,but dead, black logs, all covered over with snow. I went through the snow and asked for a broom, which was kindly lent me. We then swept off the snow as well as we could, and with some kindlings we had brought with us, we proceeded to kindle a fire. Slow work, but accomplished at last. We drew our carriage near the fire, then unfastened our horse and found him as sheltered a place as possible. But the poor creature was a pet and a hot-house plant, and protested vigorously against crusading in such dreadful weather. We encouraged him with kind words, and did our own duty and came home at night with health unimpaired, which seemed to us a most special providence. Several similar demonstrations of determination convinced the besieged that we were inexorable as fate, and in two week's time we had the pleasure of bringing his liquors to our church, where with singing, prayer and much thanksgiving we poured it into the street, fondly but foolishly hoping that the last stream of poison that had so long desolated our fair heritage was forever dried up. For a short time our village seemed an Eden. But soon the same old serpent lifted his head again, and our forces were no longer in the field to dispute his right. Well may we cry, "How long, oh Lord, how long?"