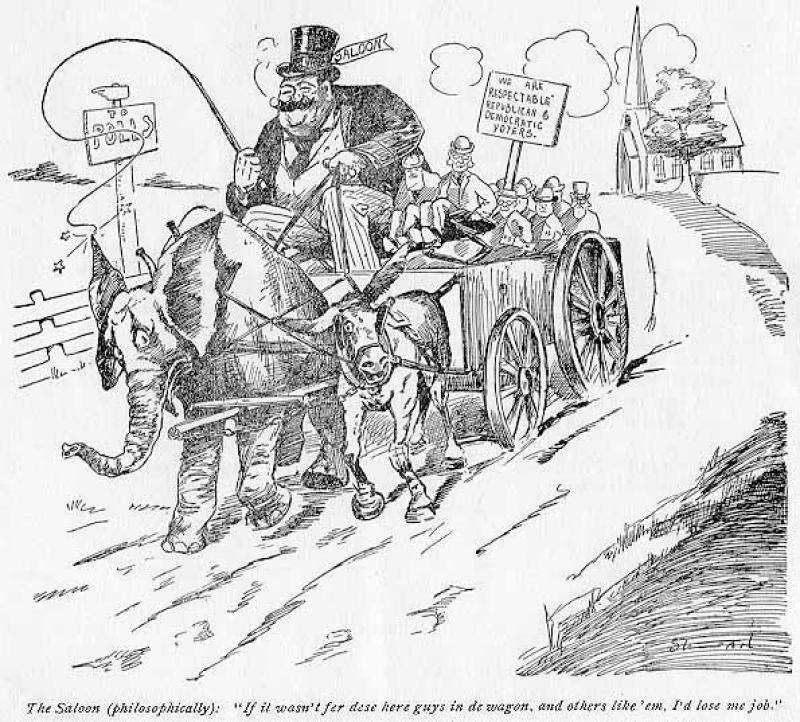 The Saloon (philosophically): "If it wasn't fer dese here guys in de wagon, and others like 'em, I'd lose me job."

"The good men in the United States, those who would like to see right and righteousness prevail in society and government, are in a majority. There is no doubt about that. These good men are the ones who really give significance and power to bad men and bad politics in this country. The good men who habitually ride in the band-wagon of corruption are the fellows who really keep that unsightly vehicle making its annual political pilgrimages down the pike.

The major quarrel is really over the chance to pick the bone of patronage.
What aggravates the situation is that many of the good men riding in the old party band-wagon admit that the company they keep is beneath them, but they still keep on being conducted through the slough by the same saloon driver.
If enough good men would get out of these band-wagons to render the trip uninteresting and unsatisfactory, the wagons would either cease to make their trips or get another driver.
There is room in our band-wagon for an unlimited number of good citizens."
(from Prohibition Cartoons by D.F. Stewart and H.W. Wilbur, Defender Publishing Company, 1904)